Shopping Cart
Your Cart is Empty
Quantity:
Subtotal
Taxes
Shipping
Total
There was an error with PayPalClick here to try again

Thank you for your business!You should be receiving an order confirmation from Paypal shortly.Exit Shopping Cart

Spring is on its way and the fairy garden urge is upon us.  “Mother Nature” however does not seem as eager as we, and the weather is not yet consistent enough for all of our tender plants to go outside.

The use of many types of small leaved plants with an assortment of leaf colors and textures along with a combination of growth habits and plant structures can give the illusion of a true garden in miniature.

To begin, find a container that is shallow. The size or style container you may choose is pretty much up to one’s imagination.

Normally, a container that is porous and with a drainage hole is recommended, however, when a shallow container with such wide proportions is used, the water can evaporate much more quickly and more oxygen is available to the shallow root system, allowing healthy root growth without much of a risk of rotting. If the container is much deeper, the addition of a drainage hole would be desirable.

When a drainage hole is not present, place a layer of horticultural charcoal in the bottom of the container then top with potting soil mixed with calcined clay (a baked clay product which holds moisture but keeps it available to the plants). Because of the large surface area of the container, the plants also have the risk of drying out too quickly. This moisture balance can be aided by the use of moist, long fiber sphagnum moss, sometimes referred to as orchid moss, to mulch the top of the soil layer.

Many garden centers feature a large assortment of miniature plants and trees that are well suited for fairy garden landscapes. 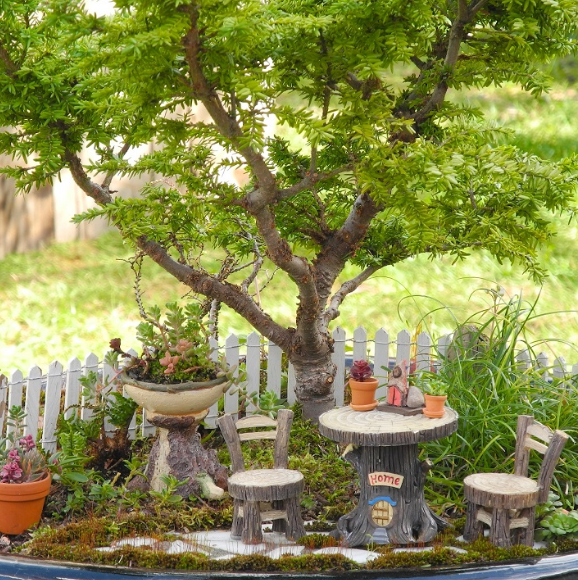 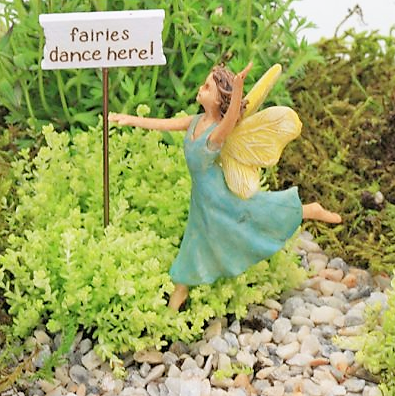 Although International Fairy Day is formerly celebrated on 24 June each year, we choose to celebrate this holiday for a whole week!

While the origins of this “holiday” are unknown, this special day celebrates those very special, diminutive beings with wispy wings and magical powers that leave a trail of fairy dust in their wake.

Whether you see them as small winged tenders of the deep natural places of the earth, or as tall stately figures with fair skin and hair, there’s one thing for certain. The world has been absolutely captured by the Fairy Craze. These creatures appear on everything from mugs to t-shirts and have been the subject of children’s fairy tales and even supernatural romances. Fairy Day celebrates these incredible mythological creatures that have captured the imagination of people everywhere and their diverse history.

Fairies have existed in just about every culture over the world, though they may have been called by different names. What they have in common, no matter where you go, is that they are spirits that inhabit the world around us and often operate by strange and often odd laws. That’s about where the similarities end, and where the amazingly diverse concepts that are the fae begin.

We’ve all heard of the winged fairies that flit around flowers and are always drawn like butterfly winged cherubs of slight form, but did you know that Dwarves and Gnomes are also part of the fae family? These creatures were common among the Germanic folk, and especially those who worked in mines and mountains. Knockers were a form of fairy that lived in mines and would ‘knock’ to warn miners of pending cave-ins and danger, hence their name.

The red-hatted gnomes that occupy so many people’s gardens were fashioned after creatures from the far north. These quiet and unassuming creatures were part of the dark northern forests and spent their time living near the homes of humans, which they’d sometimes help out.

There’s even fae that lives in the oceans like the Irish Selkie, dark of hair and eye, these creatures were able to turn into humans. Turn into humans we say? Yes! They started lives as seals and would take off their skin when they came ashore and take the form of beautiful women.

If one were lucky enough to steal their skin they’d be able to take a Selkie wife, so long as they didn’t let the skin be found!

Many famous fairies have flown into the hearts of both young and old alike.

Tooth Fairy – Besides Santa Claus and the Easter Bunny, the Tooth Fairy ranks pretty high with the younger crowd. Imagine that wide, toothless smile from the little boy or girl who discovers the Tooth Fairy has made a secret visit during the night and left a little surprise in exchange for a tooth underneath his or her pillow.

Tinker Bell - When it comes to fairies, Tinker Bell (Tinkerbell) is probably one of the world’s best known and beloved fairies. “Tink” is the feisty, fictional character from the famous James M. Barrie’s classic, Peter Pan. She also serves as the unofficial mascot of the Walt Disney Company.

Thumbelina – Watch and listen to Hans Christian Anderson’s tale about a wee fairy no bigger than a thumb.

Puck – Prankster Robin Goodfellow, Hobgoblin or Puck was one of the main characters in William Shakespeare’s Midsummer Night’s Dream.

How to Celebrate Fairy Day/Week

We choose to celebrate our favourite mythical beings for a whole week instead of just one day!

International Fairy Day! Fairy Day! World Fairy Day! It is a day or week for all to don their fairy wings, trail magic fairy dust where ever they go, dance barefoot on the grass, tinker in miniature fairy gardens, drink steaming hot flower tea and nibble on fairy bread and cakes….

Which ever way you choose to celebrate fairies - have fun and enjoy!

After an incredible summer, winter is slowly making its way through New Zealand.

Here are some tips on how to winterize miniature and fairy gardens.

Remove your accessories before it snows or freezes. Store your miniature or fairy garden accessories safely inside over the winter, you’ll get more use out of them. Most accessories these days are resin which technically doesn’t freeze but the wear and tear from the elements can take its toll on the them. Keep them safe inside where you can clean them over the winter. Spray them with UV protectant to keep the colors at their best and you’ll be ready for next spring. Find the UV spray at your local hardware store.

Remove any fallen leaves. When the rains come, the leaves will sit and rot, and rot anything underneath it.

When a plant is in a container the roots only have the walls of the pot to protect them.

Plant in the biggest pot you can. Big pots don’t freeze as fast and the extra soil insulates the roots.

Wrap the whole pot in bubble wrap. This will help to insulate it. For extra insulation add a layer of burlap.

Move the pot beside the house or under a covered porch or veranda. This can be a temporary fix to get through a cold spell. If this is something you would like to do for the winter season, make sure the light requirements are close to what the plant needs ie. full sun plants will get leggy in the shade, shade plants will burn if the sun decides to come out.

Make sure it gets enough water throughout the winter too. Keep watering that pot! Even if it is freezing outside the contained environment will need moisture and the cold will dry it out. Make sure the soil stays at least damp.

For more temperate zones with occasional freezing, get the pot up on pot feet, bricks or stones, so the water can drain and there’s nothing to really freeze and expand when the temperatures dips unexpectedly.

As you all know I am besotted with all things miniature. Last weekend I decided to take this passion to a new level...combining my love for miniatures, gardening and books.

Well after a little bit of psyching myself out because as a book lover cutting up a book is a big no no. Once I had convinced myself that the book had severed its purpose many years ago - an encyclopedia which is now very outdated, I began my project.

Begining by first looking for a page that would become part of the display, I selected a page showing John Quincy Adams, the sixth President of the United States of America. A very distinguished looking fellow.

Using Selleys Interior Quickset Aquadhere PVA Clear Drying Glue I bound all the pages together and gave the display page a coating of glue which would protect the book from any water splashes or ink smudging in the future. After some scratching in my hubby's tool kit I came accross some clamps which were used to clamp the glued pages of the book together. These pages would later become the container for my miniature garden.

I have to say I really was not prepared for the work out on my arms and hands with all the cutting and shredding of pages! This is not a one hour project...so if you are planning on making this gorgeous book garden then set aside at least 4 hours (p.s. I did take a tea break in between :D). Using a craft knife I began the task of cutting a square in which to create my miniature garden. At this point it is important to remember that the top centimeter needs to be kept neat, but from then onwards don't be a stickler for perfection because you may go mad in the process hehe. It took almost three hours of cutting and shredding to get to the stage where I was satisfied that the container was deep enough to house the succulents and cacti that I would be planting in the miniature garden.

Once I was satisfied that my book planter was deep enough I lined the inside with clingwrap, any good quality clear plastic will do. Once the edges were trimmed Selleys glue was used to glue down the clingwrap to the book preventing future water leakages. 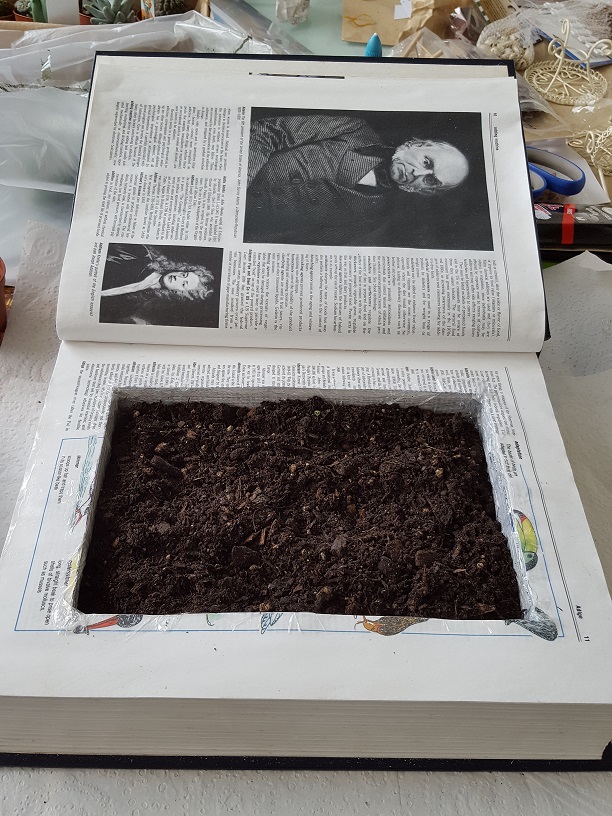 Because the book obviously does not have a drainage hole I placed a layer of pebbles so that the roots of the succulents and cacti would not get water rot should I accidentally over water. Very important at this point to remember to place a layer of charcoal which will keep the soil fresh for longer and reduce any odours. Choose a good quality potting soil specifically to the type of plants you have chosed for your miniature garden, I chose succulent potting mix. Make sure to put enough soil into the book planter. Pressing down to compact the soil will help the plants maintain their positions and your miniature items will not sink or tilt over.

Once the cacti and succulents were planted in their chosen positions I covered part of the area with Grit Red Gravel. On the left half of the book planter artificial moss was used. We stock a really good quality artificial moss which when damp smells just like the real thing :).

Of course I had brought home many more miniature pieces than was needed but like any true creative spirit ideas can change at a whim.. After trying several benches, chairs and birdhouses I decided I had found the group of miniatures that worked well toghether.

A project well worth the effort! I loved every moment of making this book planter and you will also. This book planter now owns pride of place in our family room and receives lots of oohs and aaahs from our visitors.

All items are available in our webstore. 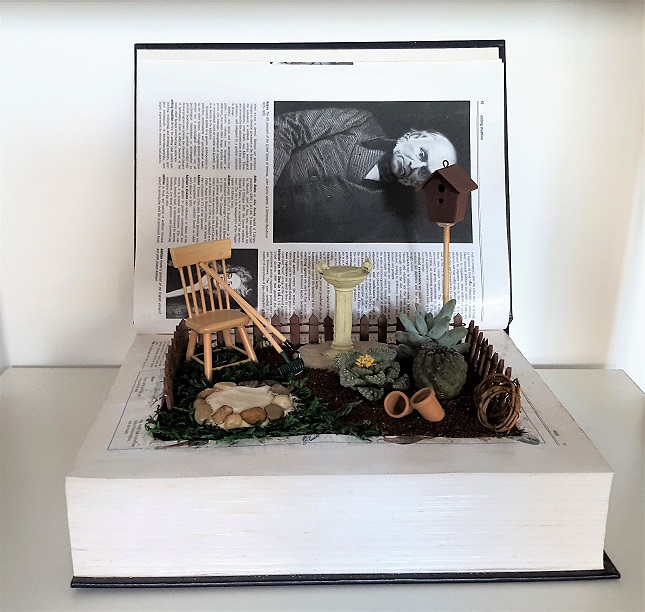